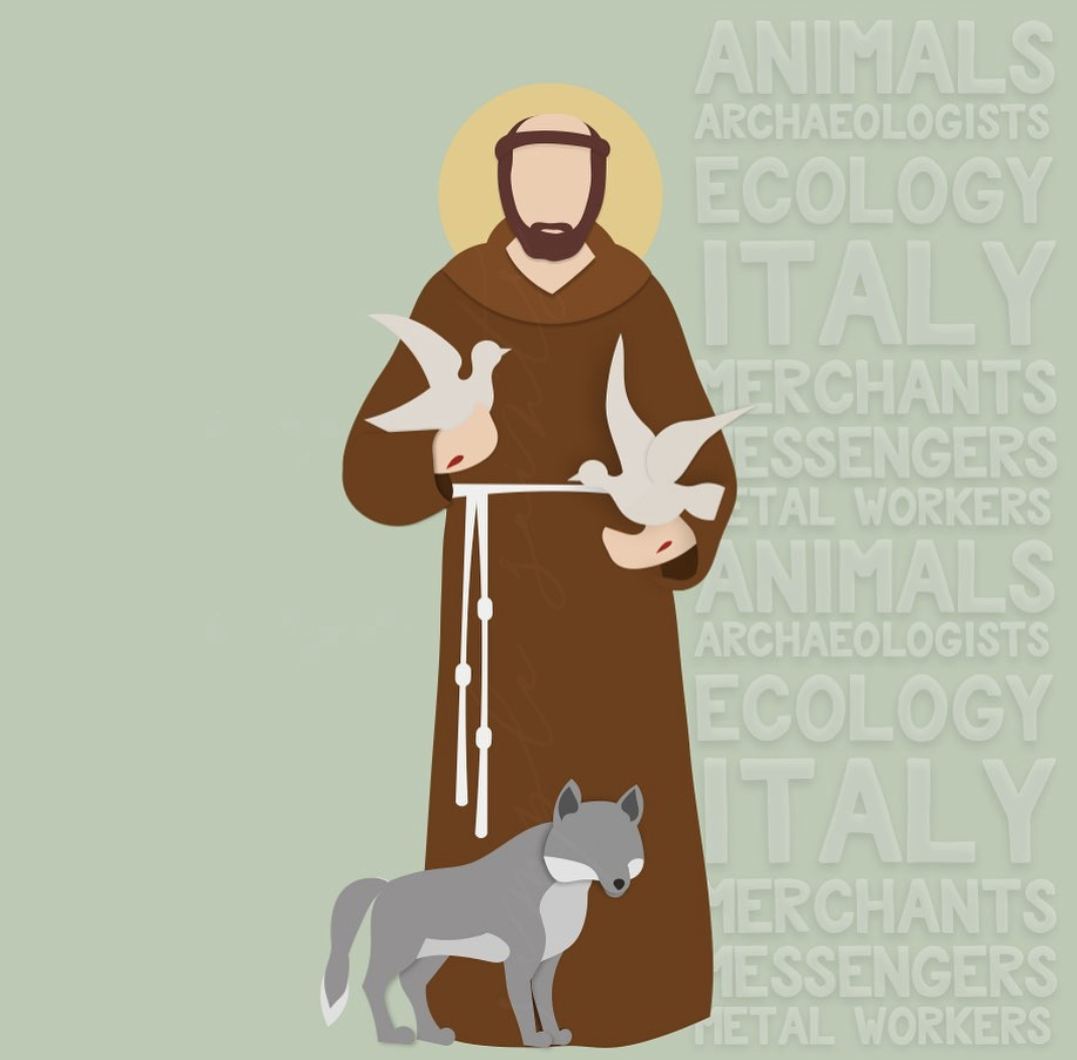 This year it was The Becket School’s turn to host the Hub Mass and we were very excited to welcome Fr Wilfred to celebrate our Mass and invite our family of feeder primary schools to celebrate the Mass with us virtually.

Each school in the hub created their own Mass which included: a brilliant introduction and scripture reflection by Our Lady and St Edwards; a beautifully sung Penitential Act by St Edmund Campion; a beautifully sung Psalm by St Patrick’s school; some lovely and thoughtful prayers of intercession by English Martyrs school, a peaceful and meditative communion reflection based on St Francis of Assisi’s prayer by Blessed Robert Widmerpool and our joyful prayers of thanksgiving by students from 8B, 8E and 8N at The Becket School. For the first time in a long while we also had live music led by the music department and our talented Y12 music students!

St Francis was a Catholic friar from Italy who gave up a life of wealth to live a life of poverty. St Francis is also known for his love of nature and animals and is the patron saint of animals and the environment. In our Hub Mass we reflected on the theme of Building the Kingdom of God and thought about the ways in which St Francis was called to build God’s kingdom here on earth. Fr Wilfred encouraged us to find inspiration from St Francis and seek to be a saint for the poor, the vulnerable and the environment.

Thank you to everyone involved in the Mass for a beautiful celebration, especially all the young people who created the prayerful music and Mass parts for our Hub celebration!

In our First Reading we picked out a key phrase – laid the foundation. This made us think about our own time in Reception and how we learned to read, write, count, paint, build, make friends, take turns and share. These early foundations of learning were laid and over our time in school have been built upon each year to help us as we learn the year 6 curriculum.

As we are thinking about choosing our secondary school we know the young people at the Becket School continue to build on those foundations and know these skills will help them as they think about exams, universities and their careers.

In our Gospel we thought about the wise man who built his house on rock. It was strong, secure and safe. Nobody or nothing could knock it down. Jesus said to Peter “You are Peter, and on this rock I will build my church.” This made Peter the foundation of the church and just like the house, he was strong and secure in his faith and in his teachings to share with those he met and two thousand years later our church is still strong, safe and secure in sharing God’s Word

All of our schools are built on strong foundations of prayer, friendship, respect, acceptance, inclusion, and love. We can all play our part in continuing to build these through our various roles as Chaplains, Buddies, School Councilors, Librarians, House Captains, Eco Warriors. In doing so we continue to build our community and our play a positive role in building God’s Kingdom

Growing up, Francis had rich parents and always had really nice clothes and didn’t care about how much money he was spending.

He became a soldier but his search for glory was short lived when he was captured and taken prisoner. After a year, Francis was released from prison. He immediately returned to his rich lifestyle.

Over the next few years Francis began to see visions from God that changed his life. The first vision was when he was sick with a high fever. Francis heard God tell him to ‘repair my church, which is falling in ruins.’

Francis is also known for his love of nature, calling creatures his ‘brothers’ and ‘sisters’. He believed that every living thing had been created by God. Legend has it that he once saved a village from a wolf which was attacking the locals. He is believed to have spoken with the wolf, explaining that the locals would feed it, if the wolf stopped attacking the people.

St Francis helped many people in his lifetime. It was not easy for him to give up all of his possessions and money but he realised that some things in life are more important than others.

Saint Francis was a dedicated follower of the Catholic Church. He died in 1226 and was declared a saint two years later.

We understand that Jesus is the foundation of our lives, we follow His example. Many believe that nobody has ever lived their life like Jesus did as well as Francis did.

Once elected, the Pope chooses a new name known as the ‘papal name’. This name gives people an idea about how he will lead the church. Pope Francis, the current Pope, is the first to choose this name in honour of Saint Francis of Assisi.

Remember, we all have something to offer to build our communities and in doing so we are building the Kingdom of God. Serving Jesus is not about where we serve but how we serve.

O divine Master, grant that I may not so much seek
to be consoled as to console,
to be understood as to understand,
to be loved as to love.
For it is in giving that we receive,
it is in pardoning that we are pardoned,
and it is in dying that we are born to eternal life.
Amen.

St Francis of Assisi, Pray for us