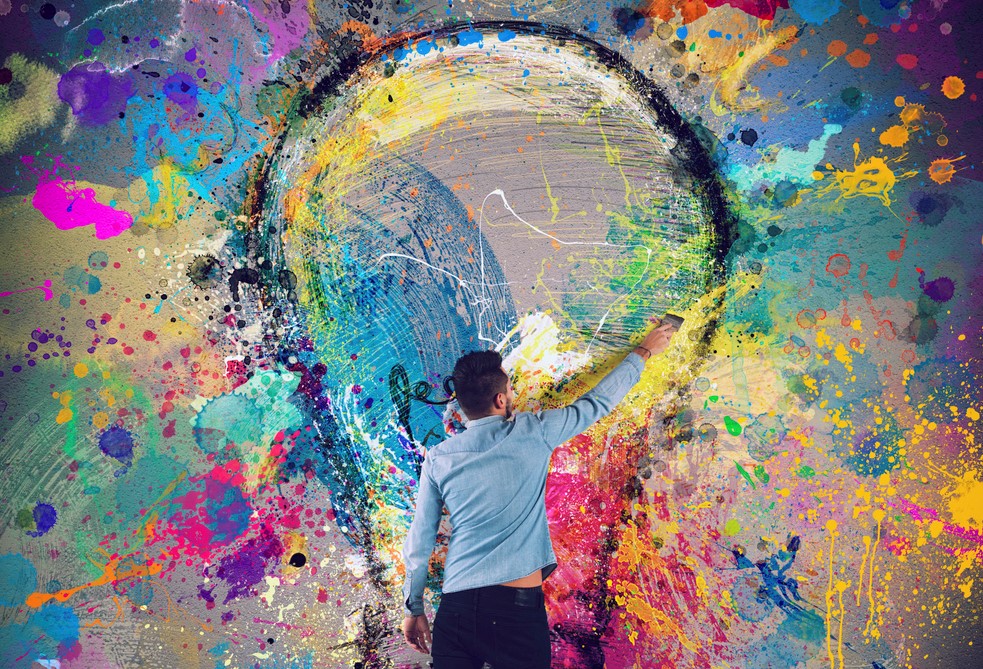 Boy draws with a brush an abstract big light bulb. Concept of innovation and creativity

This weeks word of the week is INSPIRE!

Last week America welcomed in their new President Joe Biden and Vice President Kamala Harris. During the Inauguration the world was inspired by Amanda Gorman an amazing young person who recited her own poem – ‘The Hill We Climb.’

Her words were truly inspiring.

We can find inspiration in so many different places..

You don’t need to swim the channel or perform poetry to millions of people to be inspiring. Anyone who uses the talents they have been given by God can be inspirational to others.

One of the most inspirational stories in the Bible is that of Jesus, not only because he preached the word of God, went against the authorities and spent time with people who were thought of as sinners, but because he had the courage to give His life for us. Have a listen to this song and then read the bible story.

Jesus Prays in the Garden of Gethsemane Matthew 26:36-56

36 Then Jesus went with the disciples to a place called Gethsemane. He said to them, “Stay here while I go over there and pray.”

37 He took Peter and Zebedee’s two sons with him. He was beginning to feel deep anguish. 38 Then he said to them, “My anguish is so great that I feel as if I’m dying. Wait here, and stay awake with me.”

39 After walking a little farther, he quickly bowed with his face to the ground and prayed, “Father, if it’s possible, let this cup ⌞of suffering⌟ be taken away from me. But let your will be done rather than mine.”

40 When he went back to the disciples, he found them asleep. He said to Peter, “Couldn’t you stay awake with me for one hour? 41 Stay awake, and pray that you won’t be tempted. You want to do what’s right, but you’re weak.”

42 Then he went away a second time and prayed, “Father, if this cup cannot be taken away unless I drink it, let your will be done.”

43 He found them asleep again because they couldn’t keep their eyes open.

44 After leaving them again, he went away and prayed the same prayer a third time. 45 Then he came back to the disciples and said to them, “You might as well sleep now. The time is near for the Son of Man to be handed over to sinners. 46 Get up! Let’s go! The one who is betraying me is near.”

47 Just then, while Jesus was still speaking, Judas, one of the twelve apostles, arrived. A large crowd carrying swords and clubs was with him. They were from the chief priests and leaders of the people. 48 Now, the traitor had given them a signal. He said, “The one I kiss is the man you want. Arrest him!”

49 Then Judas quickly stepped up to Jesus and said, “Hello, Rabbi!” and kissed him.

Then some men came forward, took hold of Jesus, and arrested him. 51 Suddenly, one of the men with Jesus pulled out his sword and cut off the ear of the chief priest’s servant. 52 Then Jesus said to him, “Put your sword away! All who use a sword will be killed by a sword. 53 Don’t you think that I could call on my Father to send more than twelve legions of angels to help me now? 54 How, then, are the Scriptures to be fulfilled that say this must happen?”

55 At that time Jesus said to the crowd, “Have you come out with swords and clubs to arrest me as if I were a criminal? I used to sit teaching in the temple courtyard every day. But you didn’t arrest me then. 56 All of this has happened so that what the prophets have written would come true.”

Then all the disciples abandoned him and ran away.

The Gospel of the Lord

After reading this piece of scripture, how does it make you feel? Jesus is so brave and inspirational in it. Would you have acted as he did?

Do you have the courage to do what is difficult but right, to stand out from the crowd and ultimately become a source of inspiration to those around you?

What song inspires you to pick yourself up, brush yourself down and start again?

This week’s activity is going to be a little different.  We are going to give you the freedom to use your talent to inspire others. Here are some ideas but feel free to create your own!

If you are an inspiring…

These are just a few ideas. What are your talents and how are you going to use them to inspire those around you?

God made each one of us unique, no one is the same. We are beautifully different. It’s not always the easiest thing to be ourselves, it’s often easier to follow the crowd.  But if you have the confidence to be ourselves we inspire others to do the same. Imagine a world where we are a bit like Stephen!

We must let our light shine, it is only then that we allow others to shine theirs.

We invite you  to take some time to think about the word INSPIRE and come up with a meaning for each of the letters within the word and create acrostic poem… leave your comments in the box below.

“A person’s words can be a source of wisdom, deep as the ocean, fresh as a flowing stream.”

Our Deepest Fear
By Marianne Williamson

We ask ourselves
Who am I to be brilliant, gorgeous, talented, fabulous?
Actually, who are you not to be?
You are a child of God.

Your playing small
Does not serve the world.
There’s nothing enlightened about shrinking
So that other people won’t feel insecure around you.

We are all meant to shine,
As children do.
We were born to make manifest
The glory of God that is within us.

It’s not just in some of us;
It’s in everyone.

And as we let our own light shine,
We unconsciously give other people permission to do the same.
As we’re liberated from our own fear,
Our presence automatically liberates others.

Before you can inspire others, you must find inspiration in yourself. It’s so easy to focus on what we are  not good at rather than what we are good at. Spend some time today focusing on your God given talents, what are you good at and how are you going to use these talents to inspire others?

Check out this song with some fantastic words about how we can face challenges in our lives and inspire others to do the same. God is with us every step of the way.