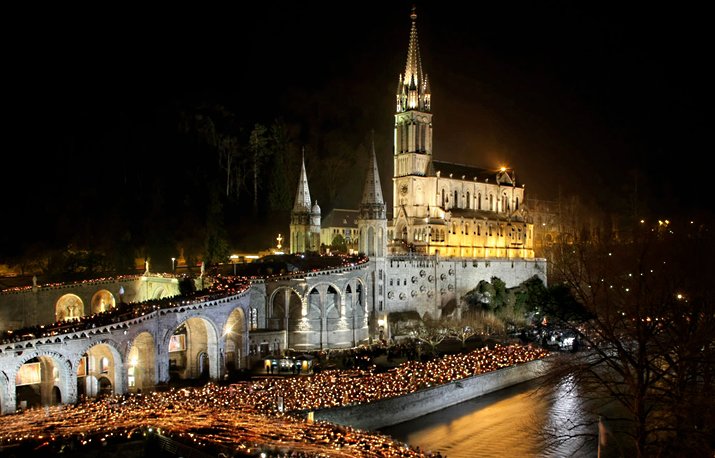 The Basilica in Lourdes

In every being, God looks not for ability but availability. Regardless of race or religion, he only wants to see people’s self sacrifice for the greater good of society, holding true to one of Christianity’s core beliefs: “there is no greater love than service to one another”. It is with such a belief, that over 40 pupils from the Becket Sixth embarked on this pilgrimage steeped in hardships but satisfying in spiritual reward. With the beginning of October, came relentless meetings and paperwork which only bogged us down alongside our AS level study. The requirement of finding valid identification and filling in forms challenged even the most academically able of us. Over the following months, the admin dragged on and on. I however, managed to wrap up my paperwork by November and began to face the reality of raising the colossal £550 for the trip. Previously, I had agreed with my parents that if I wished to go to Lourdes, I had to raise the entire amount myself.

In mid-December, we were informed of the Christmas Music Concert which had been fully booked. In anticipation for high profit margins, pupils began to bring in cakes, muffins, chocolates and many other delights. On the evening, over ten students arrived in order to set up for the busy period ahead. In the kitchen, filling up jugs of hot water, spooning out lumps of tea/ chocolate/ coffee powder became almost a batch process; whilst on the other side of the kitchen, the artisans hurriedly arranged baked goods in an appealing way. Customers came piling into the canteen like the onslaught of Black Friday shoppers all with single purpose: to purchase. With the architecture of the queuing and cashing system designed by myself, money began flooding into the float. There was so many people we dispatched a secondary trolley to sell goods from elsewhere. By the end of rush half-an-hour, we were exhausted! Congratulating all participants in their efforts, there was a final push to tidy the kitchen and put all the goods and money in the office. After a hard evening’s work, we were all satisfied with the effort we gave.

The following week we were given our individual cut of the profit. I was shocked! £22 for nearly four and half hours of work. I could’ve made twice that at work. From then on I quickly came to the realisation that fundraising with forty five other students at school events was an impractical way to raise the complete amount. Again, this was evident from the December Christmas fair (a huge event open to the community) in which we were given £18 for four hours of toil. I had to make a plan now or say goodbye to the pilgrimage to Lourdes.

As January arrived, I discussed this thought with my chaplain who advised me to ask my priest or to look for organisations that gave grants. Personally, it didn’t feel right to request my priest for money in such hard financial times so naturally, I began to surf the net for such charitable organisations but in the all the outgoing emails I sent, all I got back was “Sorry” or “We don’t give donations for service abroad”. At this point in time, I began to feel a bit hopeless and stressed out. Yet, I continued to attend all the school organised events and participate fully in order to somehow scrape enough money together.

The Lord answered my prays in late February when we were told about the annual 24hr event undertaken by the helpers. This year we attempted something that no group had even considered before, a 935 mile run to Lourdes. The task ahead seemed monumental but with such an extraordinary task leapt forward the possibility of collecting extraordinary sponsorship. As planned, in February half-term I went from door-to-door across the entire estate. The weather was relentless. Everyday, the icy winds and sub-twenty temperatures would send me home with dry, red hands. I would spend the following thirty minutes warming and defrosting them. Nevertheless, I trudged on throughout the week, collecting up to £40 per day and by the third day I had been round the estate. On the last night when I gathered all the money, I was filled with a great feeling of satisfaction knowing I had raised just under half of the total amount. Even more gratifying was my priest’s contribution towards my trip. For all these years, I thought he didn’t really appreciate my service as an altar server but in reality, the £200 cheque he offered proved me wrong. This is how my motivation to assist others was lifted.

With a newly renewed confidence in people and myself, I gave a final push in fundraising efforts attending every event possible to meet my financial target. By the deadline, I had all the money and my DBS certificate. I tell you, it had been a long shot to get to all this way but the journey was far from over.

On the 8th of July, three coaches left the Becket School packed with people uncertain about what the coming week would hold. All year preparing and in 24hrs I would be in the world’s most visited pilgrimage location. On arrival, we swiftly unpacked, ate dinner and began ice breaker activities to help merge the youth contingent. I am grateful to have met a variety of amazing people such as a person who taught herself over six different languages. At the very arrival of the horde of pilgrims, the youth squad was in full operation, shifting the elderly and less able bodied, and their cases, from coach to couch. This chaos ensued throughout the week as the pilgrims had to be wheeled to different venues across Lourdes for one event after the next. Every night, the exhaustion from the day’s labour swiftly sent me into sleep and the early wake calls only accumulated this tiredness. However, at the heart of this routine echoes the belief I previously mentioned. In sacrificing our sleep for the sake of those in need around us, we are able to share to a shallow extent the depth of God’s unconditional love.

As much chaos as there was, pilgrims and youth alike enjoyed each other’s company in the socials. The meeting of the young and the old proved to be a joyous occasion. The talent performances of younger generation energised our elderly audience while the poems of the elderly gave me a glimpse of old wit and humour. One particular highlight was when my pilgrim bought me a sleek keyring of the Grotto. She then abruptly flagged up a priest and commanded him to bless the keyring which after she handed to me. This indicated her appreciation of my support and more clearly, when my pilgrim offered me ten euros to spilt between my partner (but by policy, we had to turn this offer down).

Despite the many peaks and troughs of the Lourdes trip, the purpose to assist those less fortunate than ourselves has always been maintained. In everything we did, it was to better the quality of care of the less-able and to develop ourselves as human beings. By development, I am not talking about physical but the spiritual. In the modern age where material items have taken God’s place in many people’s hearts, it’s often those very people who are left spiritually malnourished. It seems a week away in Lourdes to focus and reflect on our lives and interaction with the outer world was strengthened through supporting the pilgrims. It was the pilgrims who in their brokenness, in their happiness and in their need came to our spiritual aid.

If you asked me then, I would have said “I think it’ll be a good break from school work” but ask me now and I would say “It’s been one hell of a spiritual journey. We have physically supported the pilgrims but they have shared their wise words of counsel.”

So, it’s true then, in every being God looks not for ability but availability. It’s taken me the entire trip to reach this conclusion and many of us may not have ever made it on this trip without your generous donation.

Thank you to The Catenians, my Parish Priest and the many people along my journey who supported me in my Pilgrimage.

From Chrisjoy Rodrigues, youth volunteer from the Becket School