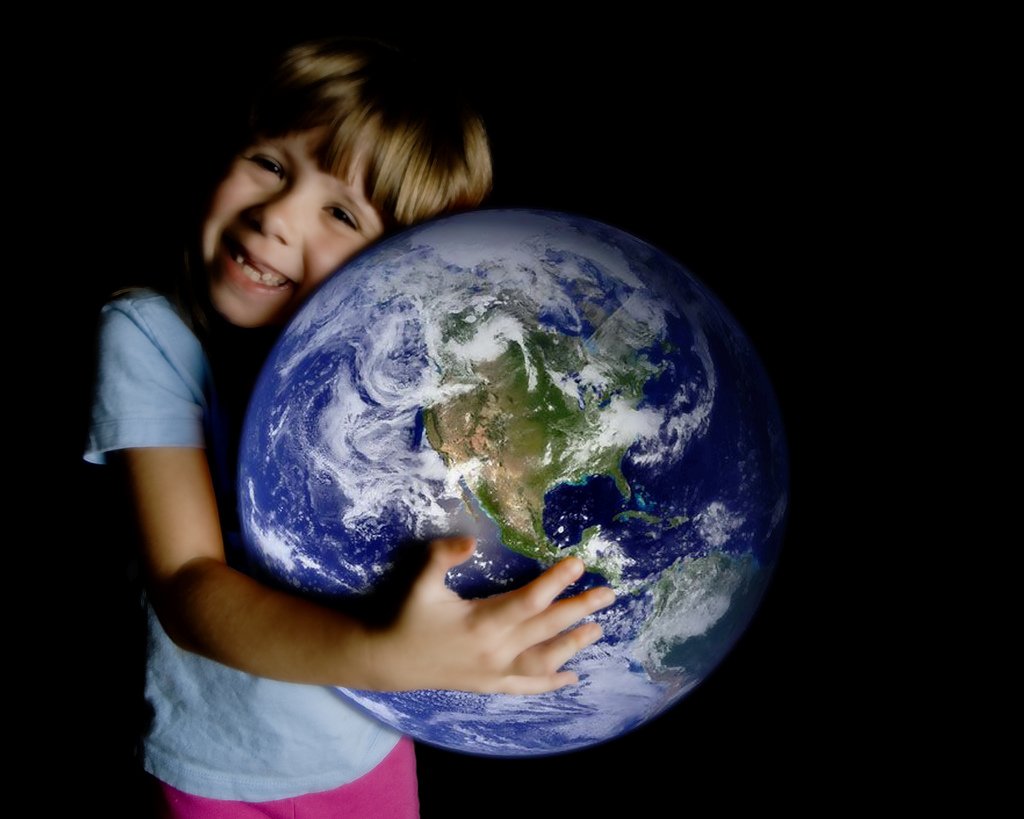 When God created the world He put humans in charge. This means that we are all stewards to the world and that we have a responsibility to take care of our planet, the environment, the animals and the other people who are in the world.

To be good stewards we must live a way of life that respects God’s creation, including the other humans that he put on earth.

It means protecting all creation, the beauty of the created world, as the Book of Genesis tells us and as Saint Francis of Assisi showed us. It means respecting each of God’s creatures and respecting the environment in which we live.
— Pope Francis, March 19, 2013

We must be the people who cause the change in the world so that it becomes a better place. We must make our hearts rich with love and with good deeds. We must help and guide others to do the right thing.

Amongst all of this we must remember to thank God and to praise Him for what He has given to us.

This week’s song links with a Psalm from the Bible which praises God, the creator of the universe.

Listen carefully and think about what you think the message of the song is.

It is a celebration of how great God is and of the wonderful things that He has made for us.

Throughout Psalm 104 lots of the things that God has made and that God has done are listed. These are just some of the 10,000 reasons mentioned in the song that we have to praise God for.

At the end of the Psalm it says

I will sing to the Lord all my life;
as long as I live I will sing praises to my God.
May he be pleased with my song,
for my gladness comes from him.
May sinners be destroyed from the earth;
may the wicked be no more.

The Psalm talks about the importance of singing to praise God.

Saint Augustine once said that someone who is singing is praying twice. Therefore it is important that whenever we get the opportunity to sing God’s praise we take it, and sing as beautifully as we can.

The song above has all the lyrics so play it again and this time join in and sing along!

Sing together to praise God for the amazing world that He has created for us.

Try to remember to praise and thank God for his creation whenever you can.

The picture this week gives you a challenge!

It is based on the scripture found in Luke’s Gospel:

Do not be afraid, little flock, for your Father is pleased to give you the Kingdom. Sell all your belongings and give the money to the poor. Provide for yourselves purses that don’t wear out, and save your riches in heaven, where they will never decrease, because no thief can get to them, and no moth can destroy them. For your heart will always be where your riches are.

This scripture is teaching us that even if we make lots of money and save it all up for ourselves we can’t take it into heaven with us. This is the same with our time, our clothes, our food and many other things.

Instead, if we want to fill our purses in heaven with things that will not be stolen and will not rot away then we should do good deeds which will build up in heaven.

This means that in our daily lives it is not all about who has the most money, or the nicest clothes or the most expensive toys. It is about who has the richest heart and that is measured by the good that we do and the love that we show to others.

By taking care of the planet that God made for us to live on we are doing good. We do good by caring for others, just as it explains in Leviticus:

This scripture is telling us that we should always be thinking of others instead of being greedy for ourselves. We should give some of what we have to others so that they can live better lives.

It’s time to test what we have learnt!

Try to use what you have learnt to fill in the crossword on the interactive whiteboard! 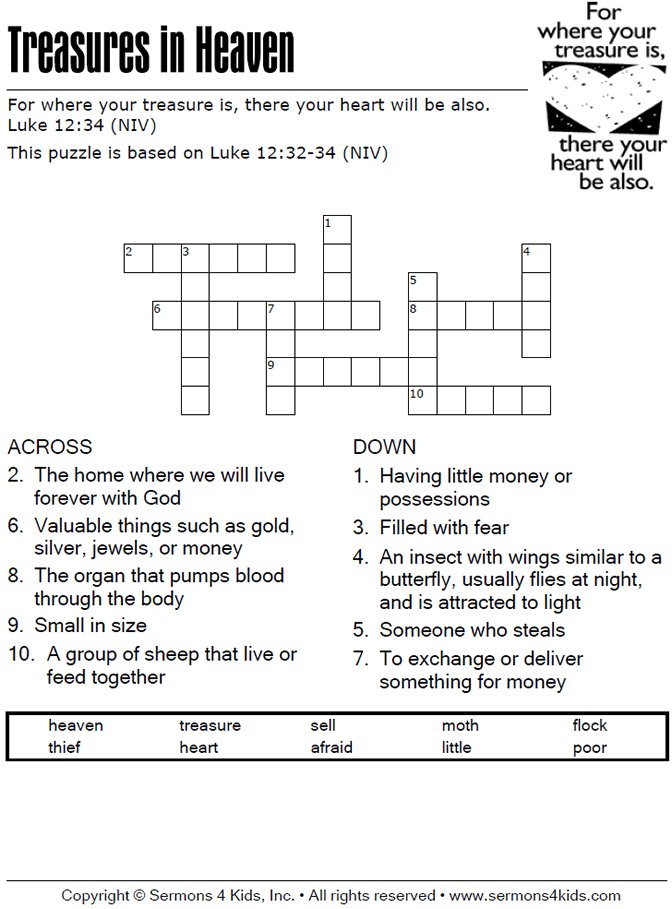 Try to think of as many ways that you can take care of the earth in 60 seconds…go!

Write your ideas on the whiteboard at the front or on a big piece of paper that you can all see.

There are lots of ways to take care of the world that God created for us but many people don’t know about them.

Your task is to create a guide to taking care of the world.

There are many different ways you could do this: a video message, a PowerPoint presentation, a leaflet, a booklet, a poster.

Use the ideas that you came up with at the start in your guide.

For those people who do not know how to take care of the world you will be teaching them, just as Isaiah explains:

… learn to do right. See that justice is done—help those who are oppressed, give orphans their rights, and defend widows.

Part of taking care of the world is teaching others how to do the right thing. Share your guide with as many people as possible so that everyone can respect God’s creation and can be good stewards.

It’s time to hear from a very cool guy!

This video is made by the Kid President. He makes lots of videos, usually about making the world more awesome.

Watch carefully and think about the words of the poem.

What was your favourite part of the poem?

One line which is all about stewardship and the work that God has asked us to is:

The world can be better and you’ll be the cause

We have a responsibility to look after the world that we live in. We can do great things just by doing small things everyday. We are taking care of the world by putting our litter in the bin, recycling, riding a bike instead of going in a car. All these things make the world better and we can do all of them.

In the poem the Kid president also says

The wind keeps us sailing, its love gives us hope

At Pentecost the Holy Spirit was experienced by the disciples as wind and fire. The Holy Spirit is always with us in our lives to keep us sailing. It helps us to keep trying to make the world a better place. It is the voice that whispers to us and inspires us to keep going.

We ask the Holy Spirit to help us to keep going as we try to make the world a better place.

Help us to remember that although we are just one person we can be the cause of big and amazing things.

This week’s Scripture is the story of how the world was created by God.

Watch the video or read the Scripture below.

A reading from the book of Genesis.

In the beginning God created heaven and earth. Water lay deep over the surface of the earth and the darkness was absolute.

God said, “Let there be light.” And there was light. God divided the light, which He called day, from the darkness, which was night. And so ended the first day and night of creation.

Next God said, “Let there be sky over the waters,” and He called sky heaven; and this was on the second day.

On the third day dry land rose up through the waters, and God called the land earth, and the waters sea. At once grasses took root on the earth and every kind of plant; buds opened, seeds sprouted and trees grew heavy with fruit.

On the fourth day God said, “There must be lights in the sky to divide night from day and to mark the seasons.” For this He created two lights, the greater, which He called the sun, to shine over the day, and the smaller, the moon, to shine at night. Around the moon He set the stars.

On the fifth day God created all the creatures of the sea and sky. Birds flew through the air, while in the watery depths great fish swam silently.

On the sixth day He made all the animals, from the wild beasts of the desert and jungle to the cattle grazing in the fields. And God said: “I shall make man to rule over them.” And so from the soil itself God created mankind, both male and female in His own likeness. and that was on the morning and evening of the sixth day.

On the seventh day God rested, for His work was done, and He saw that all that was well with the world.

The word of the Lord.

It is important to remember that it was God who created everything, the light, the land, the seas, the plants, the animals and us, humans.

When God created humans He put them in charge of all that He created. With this task comes great responsibility.

It is our job to respect the world that God has created.

In order to thank God for what He has created we must use the world and its resources wisely so that we do not spoil it.

Think about how you use the earth.

Do you respect the world as you should?

How could you show that you respect the world that we live in?

God has made so many wonderful things for us to enjoy and it is important that we remember to thank God for the wonderful creation He made.

Close your eyes and think about all of the things in the world that you like and that you are thankful for.
Lord, thank you for the amazing world that you have made for us to enjoy.