The greatest source of our religion is the Word of God, the Bible. In the Music Resource we will learn about the two parts that the Bible is divided into and there is a catchy song which will help us to learn the books that are in the New Testament!

This week’s Picture Resource is actually 10 pictures which show different Bible stories and your task is to choose the correct source of that story.

You will have the chance to test out your skills as a disciple by seeing how good you are at passing on an important message during our Action and our Video Resource will remind us of how the Bible began and how important it was to give the right meaning as the stories of the Bible were handed down.

Finally we will hear the story of when Jesus read some of the same scriptures that we read today and we will think about those times where it may be difficult to share our important message about the love of God.

Throughout the week try to read a new part of the Bible that you have not discovered before and think about God’s message to you through those words.

These books can be split into 2 sections:

1. The Old Testament – which is made of the promises that God made with His chosen people before Jesus

2. The New Testament  – which is the promise made between God and all people through Jesus.

To help us to learn more about some of the books of the Bible listen to these songs and see how many of the books you recognise.

Can you remember any of the books from the songs?

Do you know which books are the 4 Gospels?

Next time you hear a reading in a Liturgy or during Mass see if you know whether it is from the Old Testament or the New Testament and think about what this means about the scripture that the book is from.

This week there are lots of pictures of Bible stories for you to look at, all you need to do is to work out which of the books of the Bible these stories come from by using the list below.

See if you can work out the source of the story. 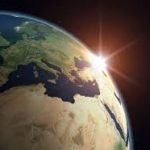 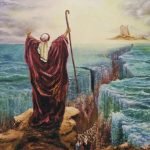 2. The parting of the Red Sea 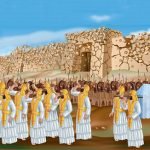 3. The walls of Jericho 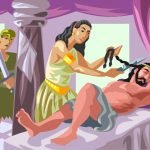 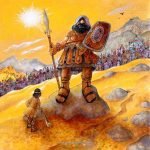 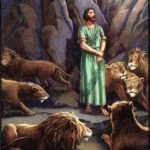 6. Daniel in the pit of lions 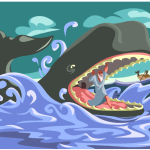 7. Jonah and the big fish 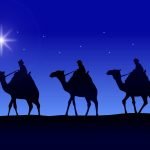 9. Jesus washes the feet of the disciples 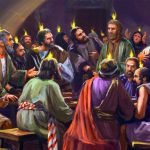 Which book is the correct source of the story?

9. Jesus washes the feet of the disciples – John 13

All these wonderful stories just go to show what an amazing book the Bible is.

If there were any stories that you didn’t know make it your mission to go back to the source of that story and find out more about the story and the book of the Bible that it comes from!

Often stories are easier to understand when you read what else has happened in that book so try to find out what else is happening in the source of your story to help you to understand more.

See how good you are at passing on a special message to the people near you.

Take it in turns to whisper one of the following important messages to your neighbour. They should then whisper this to their neighbour until everyone in your Class has heard the message.

At the end get the last person to say the message to the person that started to see if you have all done a good job at passing on the true message.

When you are ready to start click on one of the messages below and then click on the bar above to cover the message again.

Follow me and I will make you fishers of men

Speak Lord, your servant is listening

Love your neighbour as you love yourself

The Lord is my strength and my shield

For God so loved the world that He gave His only Son
Help us Lord when we have an important message to share with others.

Help us to listen carefully when others speak and give us the courage to speak the truth.

Watch this video and listen carefully to hear some of the history of the Bible.
How many books are in the Catholic Bible?

How many centuries did it take to compose the Bible?

Who wrote the Bible?

What is your favourite part of the Bible?

It is important to remember the source of the Bible and how it was recorded. It took 15 centuries to create and it contains the Word of God.

There is always an interesting story or some useful advice when you open the Bible, try exploring some new stories and reading the Word of God.

In this scripture story we will hear how Jesus went to his home town of Nazareth and read from the book of Isaiah (a book that is from our Old Testament). When He read it He told the people that the scripture had come true (because He was the Messiah) but they did not understand or believe him so they were cross.

Read the story and watch the video below.

A reading from the Holy Gospel according to Luke.

Then Jesus went to Nazareth, where he had been brought up, and on the Sabbath he went as usual to the synagogue. He stood up to read the Scriptures and was handed the book of the prophet Isaiah. He unrolled the scroll and found the place where it is written,

“The Spirit of the Lord is upon me,
because he has chosen me to bring good news to the poor.
He has sent me to proclaim liberty to the captives
and recovery of sight to the blind,
to set free the oppressed
and announce that the time has come
when the Lord will save his people.”

Jesus rolled up the scroll, gave it back to the attendant, and sat down. All the people in the synagogue had their eyes fixed on him, as he said to them, “This passage of scripture has come true today, as you heard it being read.”

They were all well impressed with him and marveled at the eloquent words that he spoke. They said, “Isn’t he the son of Joseph?”

He said to them, “I am sure that you will quote this proverb to me, ‘Doctor, heal yourself.’ You will also tell me to do here in my hometown the same things you heard were done in Capernaum. I tell you this,” Jesus added, “prophets are never welcomed in their hometown. Listen to me: it is true that there were many widows in Israel during the time of Elijah, when there was no rain for three and a half years and a severe famine spread throughout the whole land. Yet Elijah was not sent to anyone in Israel, but only to a widow living in Zarephath in the territory of Sidon. And there were many people suffering from a dreaded skin disease who lived in Israel during the time of the prophet Elisha; yet not one of them was healed, but only Naaman the Syrian.”

When the people in the synagogue heard this, they were filled with anger. They rose up, dragged Jesus out of town, and took him to the top of the hill on which their town was built. They meant to throw him over the cliff, but he walked through the middle of the crowd and went his way.

In the video some people argue with Jesus and say that the things they have heard about Jesus are not true, why are they complaining about the sources of their information?

Jesus explains that a prophet is never welcome in his home town, why do you think that is?

Do you ever find it difficult to tell the truth and to speak in front of the people that you know?

How do you think you would feel if you heard Jesus reading the scriptures to you?

Please help us Lord to have the wisdom to recognise the truth in the words that we hear.

Give us the courage to speak in front of those that we know and to be honest.