KS2 How happy are you?

This week we are looking ahead to the final Sunday of the church’s year which is the feast day of Christ the King and National Youth Sunday. Youth Sunday reminds everyone just how important young people are and the resources this week give us an opportunity to prepare something that can be shared at Mass.

Start your week by reading the Beatitudes below and then scroll down for this week’s resources. Throughout the week think about how you can be truly happy and how you can share that love and happiness with others around you.

“Happy are you when people insult you and persecute you and tell all kinds of evil lies against you because you are my followers. Be happy and glad, for a great reward is kept for you in heaven. This is how the prophets who lived before you were persecuted.

This week’s music is all about how we can be joyous and happy once we understand just how much God loves us.

When we are loved as much as God loves us we can feel happy because we know that we always have someone to turn to. Whether we need to say sorry for something, to ask God for help or even to say thank you for the amazing things that we have, God will always be there to listen to us and to share love with us.

Sometimes it is difficult to find the time to turn to God and to say the things that we want to say so we are going to take some time to do this now.

Choosing either a sorry, asking or thank you prayer take some time now to talk to God who loves you unconditionally.

For help writing these prayers use the resources from this page:

You might like to listen to the song again as you write your prayers so that you can feel the happiness that God’s love and mercy brings!

On the 23rd November it will be the feast day of Blessed Miguel Agustín Pro. 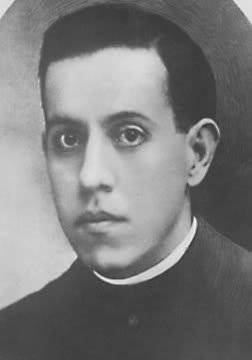 Miguel Pro was born in Mexico and decided to become a Jesuit priest during a time when Catholics were persecuted in that country. At the time priests were not allowed to wear their religious clothing (called habits), they couldn’t vote and they were not allowed to speak to newspapers about how they thought that the country was being run. The situation was so bad that Miguel Pro had to leave Mexico to become a priest in Belgium but he returned to his home country in 1926 by which time public worship had been banned.

Father Miguel Pro disguised himself as a mechanic, a beggar and and office worker as he rode around on his bike to secretly distribute Communion and helping those who were in need.

In 1927 someone tried to assassinate a Mexican General and Father Miguel Pro and 2 of his brothers were wrongly arrested for this crime. Even though the real man came forward the Mexican officials wanted to teach Catholics a lesson so they decided to execute Miguel Pro and his brothers anyway.

When Father Miguel Pro came forward to be executed he forgave all of the officers and the men who were about to shoot him. He didn’t want to be blindfolded but instead he knelt down and prayed. When the time came to be executed he opened out his arms like Jesus on the cross holding a crucifix in one hand and a rosary in the other and shouted “Long live Christ the King!” 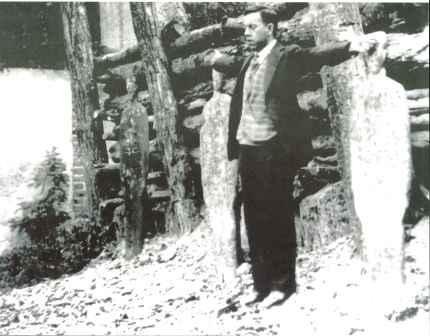 The President of Mexico at the time insisted that lots of photographs were taken of the execution so that it would scare the other Catholics but this plan didn’t work!

Thousands of people came to Father Miguel’s funeral and thousands were there at the cemetery where he was buried. Instead of scaring the Catholics they were inspired to keep fighting for their rights and their freedom of faith and they carried the photographs with them to remind themselves of how brave Father Miguel had been.

How does the picture above make you feel?

Do you stand up for what you believe in?

Have you ever been inspired by someone’s bravery?

Take a large sheet of paper and bring together your ideas of where you might need to brave and to stand up for what you believe in.

Think about who or what rules your life and whether you are standing up for the right things.

Christ the King, by the intercession of Blessed Miguel Pro please help us to be brave and to stand up for the right things.

Help us all to inspire others through our words and our actions.

Our Scripture this week is called The Beatitudes which is where Jesus taught his followers how to be truly happy.

Read the eight statements which help to explain what Jesus meant by each of the Beatitudes.

Be Humble
Let God work through you

Be Sorrowful
Grieving is ok, it shows your love

Be Gentle
It will get you further than you think

Be Merciful
We all need forgiveness

Be Pure
Open you heart and you will see God

Be Peaceful
Everybody is a child of God

Your task is create an image which goes with each of these attitudes.

You could work together on a large piece of artwork or split into 8 groups which works on one attitude each. You could take photographs of freeze frames that you act out or if you are feeling really adventurous you could devise some short dramas and make a video of them!

Think about how you could use the images that you have created to inspire others. You could share them in your parish church on Youth Sunday or you could display them near the entrance of your school so that everyone is reminded of how they could be happy.

This week we have been asking the question: “How happy are you?”

Even if there are things that we dislike we can still find something to choose to be happy about.

In this video clip we will see a girl called Pollyanna who is trying to convince the other people that they can play the Glad Game by always finding something to be happy about, no matter what the situation is.

So as you saw in the video, no matter how grumpy you might feel about a situation there is always something that you can pick out to be glad about.

See if you can do it with some of these examples:

1. It is raining outside so you can’t go outside for play time.

2. Your favourite pair of shoes doesn’t fit you anymore.

3. Although you made a few mistakes, your friend does really well in their spelling test.

Can you think of any difficult situations in your life where you could find something to be glad about?

When it comes to happiness we have a choice. We can choose to be sad and grumpy about a situation or we can look for the positives and find something to be happy about.

Create a role play to show the Glad Game in action, try to show how we can always find something to be happy about. You can use the examples above or use some of your own.

When we find things to be glad about we are finding God and the joy that recognising God brings.

Try your best to play the Glad Game this week. Help others to see the good things that God has given us in our lives.

The scripture below holds many ideas of how we can show mercy and, following on from the Year of Mercy in 2015, we know that we are all called, young and old, to be merciful.

Read this Gospel together and see if there is a particular bit that stands out for you.

“When the Son of Man comes as King and all the angels with him, he will sit on his royal throne, and the people of all the nations will be gathered before him. Then he will divide them into two groups, just as a shepherd separates the sheep from the goats. He will put the righteous people at his right and the others at his left. Then the King will say to the people on his right, ‘Come, you that are blessed by my Father! Come and possess the kingdom which has been prepared for you ever since the creation of the world. I was hungry and you fed me, thirsty and you gave me a drink; I was a stranger and you received me in your homes, naked and you clothed me; I was sick and you took care of me, in prison and you visited me.’ The righteous will then answer him, ‘When, Lord, did we ever see you hungry and feed you, or thirsty and give you a drink? When did we ever see you a stranger and welcome you in our homes, or naked and clothe you? When did we ever see you sick or in prison, and visit you?’ The King will reply, ‘I tell you, whenever you did this for one of the least important of these followers of mine, you did it for me!’

Which part of the Gospel was most important for you?

What do we have to do to be part of the righteous group?

Who is Jesus telling us to help?

It can be easy to ignore the people in need around us even though there is usually something very simple that we can do to help.

In your Class think of some ways that you could help other people and continue to be merciful.

Are there any ways that you as young people can help others?

e.g Helping the younger years in school? Playing with people who are left out at break time?

Look out for those around you in your community.

Your actions are just as important as those who are older than you. As Timothy said:

Do not let anyone look down on you because you are young, but be an example for the believers in your speech, your conduct, your love, faith, and purity.

Do you best to be an example to others by helping the people in need around you and you will soon inspire others to do the same.