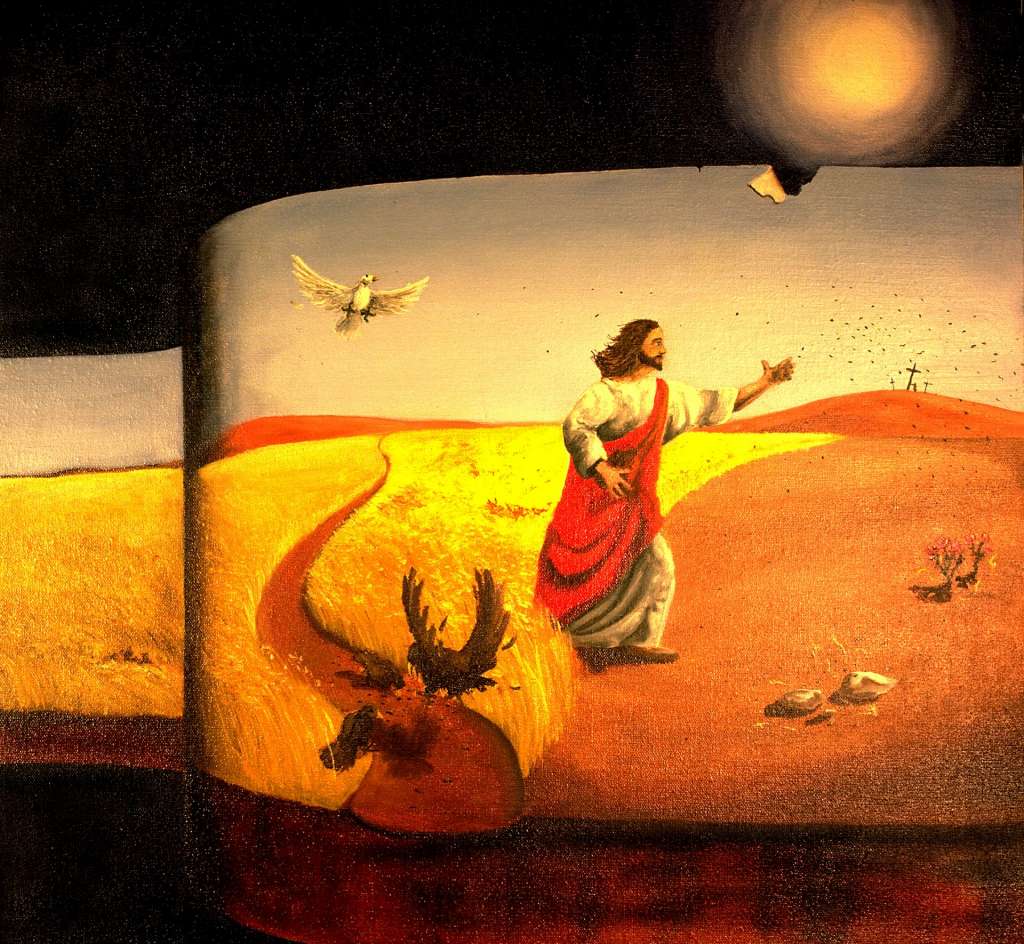 Listening and sharing are two of the most important ways that we communicate with each other.

This week’s Music Resource shows how music can be shared across the world and how, if we listen carefully enough, we can find a special message in the music we hear.

The Picture Resource will help us to think about good ways and bad ways of sharing and listening and then there will be the opportunity to use these skills during this week’s Action.

One of the ways that we can share information is through the internet so this week we will be watching a broadcast from the Year 11 Becket students who were on retreat at The Briars last week who will be sharing what makes them happy.

Think about how you communicate with others this week. Are you a good listener? Do you share the message about the love of Jesus?

This song is all about sharing.

Listen carefully and see how many examples of sharing you can hear!

How many ways of sharing did you hear?

What were some of the ways of sharing that you heard?

Another way that we are asked to share with others is by sharing the good news about Jesus by telling others how much Jesus loves us and sharing the gifts that God has given us.

The man who sings this song is called Jack Johnson and his special gifts from God are making music and singing.

He shared his talents by travelling all the way from America to a place in Africa called Zululand.

Watch the video below to see how much joy sharing can bring!

Look at these examples of listening and sharing.

For each image think:

Who is sharing? Is it a good or bad example of sharing?

Who is listening? Is it a good or bad example of listening?

How could the examples be better?

We should all have the chance to share our thoughts and feelings with others but to do this we all must be willing to listen to others too.

Look at the pictures below and see if you agree with the points.

Make a list of any other things that you think makes a good listener. Add your ideas to the comments box below so that all of the schools can see your ideas.

As we think about listening and sharing we need to try it out too!

See how good you are at passing on a special message to the people near you.

Take it in turns to whisper one of the following important messages to your neighbour. They should then whisper this to their neighbour until everyone in your Class has heard the message.

At the end get the last person to say the message to the person that started to see if you have all done a good job at listening and sharing.

When you are ready to start click on one of the messages below and then click on the bar above to cover the message again.

Follow me and I will make you fishers of men

Speak Lord, your servant is listening

Love your neighbour as you love yourself

The Lord is my strength and my shield

For God so loved the world that He gave His only Son
Help us Lord when we have an important message to share with others.

Help us to listen carefully when others speak and give us the courage to speak the truth.

What are some of things you think we should say and do more often?

Share with us your thoughts in the comments below!

Thank you Lord for the opportunity to share the things that make us happy and joyful, we pray that they inspire other people too.

When Jesus spoke to His disciples and His followers he often told stories to explain the right way to do things. These stories are called parables.

Parables are simple stories used to explain an important lesson or message and Jesus used many of them during His work and teaching on earth.

Just like us, Jesus’ followers were sometimes confused by the parables that Jesus told and they didn’t understand what they really meant. In this scripture from Mark’s Gospel Jesus explains what the Parable of The Sower means and told us how it applies to us in our lives.

Read the story carefully and see if you understand Jesus’ parable.

This Scripture passage is longer than usual so you might like to divide it between different readers.

A reading from the Holy Gospel according to Mark.

Again Jesus began to teach beside Lake Galilee. The crowd that 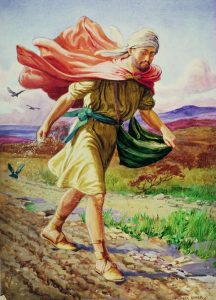 gathered around him was so large that he got into a boat and sat in it. The boat was out in the water, and the crowd stood on the shore at the water’s edge. He used parables to teach them many things, saying to them:

“Listen! Once there was a man who went out to sow grain. As he scattered the seed in the field, some of it fell along the path, and the birds came and ate it up. Some of it fell on rocky ground, where there was little soil. The seeds soon sprouted, because the soil wasn’t deep. Then, when the sun came up, it burned the young plants; and because the roots had not grown deep enough, the plants soon dried up. Some of the seed fell among thorn bushes, which grew up and choked the plants, and they didn’t bear grain. But some seeds fell in good soil, and the plants sprouted, grew, and bore grain: some had thirty grains, others sixty, and others one hundred.”

And Jesus concluded, “Listen, then, if you have ears!”

When Jesus was alone, some of those who had heard him came to him with the twelve disciples and asked him to explain the parables. “You have been given the secret of the Kingdom of God,” Jesus answered. “But the others, who are on the outside, hear all things by means of parables, so that,

‘They may look and look,
yet not see;
they may listen and listen,
yet not understand.
For if they did, they would turn to God,
and he would forgive them.’” 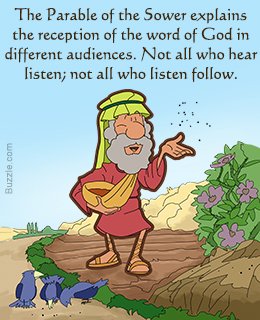 Watch this video to see how we are like the seed in the parable.
What sorts of things are like the bird and take you away from God?

How do you use God’s message and spread it to others?

Although things may worry us and get in our way it is you who decides what you will do with God’s message.

Try to be the faithful person who shares the message of God with others and lets it sink in to their heart.