“So there is no difference between Jews and Gentiles, between slaves and free people, between men and women; you are all one in union with Christ Jesus. If you belong to Christ, then you are the descendants of Abraham and will receive what God has promised.”

Our Word of the Week this week is

Belonging is when we feel like we fit in with something or when we don’t feel out of place. It is important for us to know that whoever we are and wherever we are from, we all belong to something. And that is because what we belong to is Jesus. We all belong to Jesus and, therefore, receive His love, forgiveness and kindess through our union with Christ. 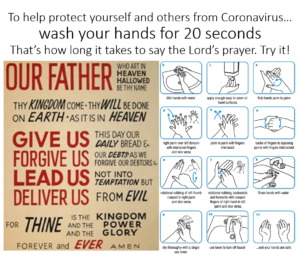 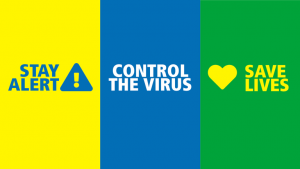 Monday of week 26 in Ordinary Time

WORD OF THE WEEK

We end by making the Sign of the Cross. 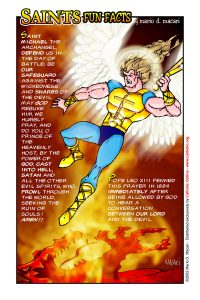 Saint Michael the Archangel isn’t a saint, but rather he is an angel, and the leader of all angels and of the army of God. This is what the title “Archangel” means, that he is above all the others in rank.

St. Michael has four main responsibilities or offices, as we know from scripture and Christian tradition.

Below is what we call at Christ the King our Menu. It is something we like to do at the start of the week to reflect upon our theme through the Scriptures. Treat it a bit like a meditation. Open your minds and hearts to the words on the screen and see how it can impact your life today to help us make every feel like they belong. 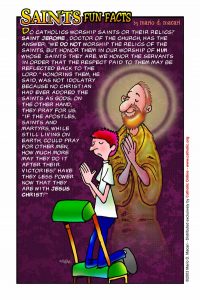 Before he was known as Saint Jerome, he was named Eusebius Sophronius Hieronymus. He was born around 342 AD, in Stridon, Dalmatia. Today, the town, which ceased to exist in Jerome’s time, would likely be in Croatia or Slovenia.

Lectio Divina literally translates as “divine reading”. It is a way of developing a closer relationship with God by reflecting prayerfully on His words.

LECTIO – Read
Read the Scripture for the first time.

Are there any words or phrases that impact you?

MEDITATIO – Reflect
Read the Scripture for the second time.

What is the message that God is trying to say to us?

ORATIO – Respond
Read the Scripture for the third time.

How am I going to respond to God’s message?

CONTEMPLATIO – Rest
Read the Scripture for the fourth time.

Spend a moment contemplating and allow God to work in you.

Thanks be to God. 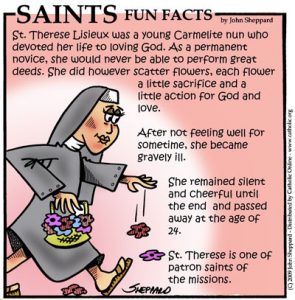 Generations of Catholics have admired this young saint, called her the “Little Flower”, and found in her short life more inspiration for their own lives than in volumes by theologians.

Yet Therese died when she was 24, after having lived as cloistered Carmelite for less than ten years. She never went on missions, never founded a religious order, never performed great works. The only book of hers, published after her death, was an brief edited version of her journal called “Story of a Soul.” (Collections of her letters and restored versions of her journals have been published recently.) But within 28 years of her death, the public demand was so great that she was canonized.

Be creative and write your own prayer for your form to pray based on the below Scripture:

“Remember that I have commanded you to be determined and confident! Do not be afraid or discouraged, for I, the Lord your God, am with you wherever you go.” 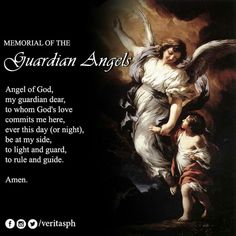 Today’s Scripture reflection comes from the chaplain at Christ the King, Joe.

Have a great weekend everybody! 🙂